Here are the next two sentences uttered by the 'Princess of Liechtenstein':
"We first met here in the hotel three years ago and then we met last year at the party and that is when we really fell in love. It is a very special place for us."

1. To give first a German tint the actress should have pronounced the vowel with more lip-rounding.
2. The rise on met is definitely un-German.

3. The r-sound in three is of a velar type typical of many a German speaker of English.

4. On then there's a fall-rise, which only an advanced German speaker of English would use.

In September of 2011 I stayed in a hotel in the north of Germany. This hotel is the German branch of an American chain founded in 1946. Each guest is handed a small folder with a few hints in German and in English when they check in. Here's a scan of the English part. 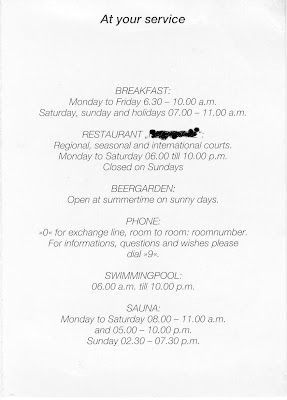 I was astonished to see that they have a jurisdiction of their own from Monday to Saturday.
posted by Kraut at 13:24 2 comments:

In 1961 Joseph Desmond O'Connor and Gordon Frederick Arnold jointly published Intonation of Colloquial English (Longmans) bearing the subtitle A Practical Handbook (/hæmbʊk/). In said book they offered a set of ten tone groups based on six tunes. The authors recorded samples of their illustrative sentences on four 7" gramophone records.

A 2nd edition came out in 1973, this time the recordings were sold on magnetic tape. A seventh tune was added (see the table below).

There are various combinations of single tunes and - what the authors call - heads and tails which themselves consist of various subtypes. A combination of a tune and various heads or tails that conveys the same attitude of the speaker is called a Tone Group. O'Connor and Arnold come up with ten such tone groups, which are given fairly abstract names in the 1st edition. To make them easier to memorise these groups receive new names in the 2nd edition:

It won't take you long to find both the sound files of the 2nd edition and a copy of the book on the internet.
posted by Kraut at 09:42 3 comments:

Stimulated by me [sic] own blog of the 18th of July I listened to some randomly selected sections of the ITV series Brideshead Revisited of 1981.


In the final episode – it’s episode 11 entitled ‘Brideshead Revisited’, which echoes the title of the whole series – , Lord Marchmain, who is terminally ill, returns to his ancestral home to die. In one scene, Julia Flyte (played by the actress Diana Quick) thanks the doctor for his opinion on the health status of Lord M. by saying: “Thank you for your advice, doctor.” Listen to the initial sound of the word ‘thank’:

Here's the waveform for /θæŋ/:

In blog no. 410 Jack Windsor Lewis once again deals with the phenomenon of stressed syllables containing a schwa, a phenomenon which seems to have escaped the attention of many other experts on English phonetics. He mentions several broadcasts, films and the like where a speaker stresses such a syllable. One of these items is to be found in a scene from the British TV film Brideshead Revisited, where in episode 7 with the title 'The Unseen Hook' the actor Jeremy Irons says (at about 44:24): "For God's sake! You don't mean to spend the rest of your life with Kurt, do you?" For those of you who do not have access to this episode, here's an extract.

Jack Windsor Lewis in his blog 408 describes the results of his consultations of various dictionaries with regard to the pronunciation(s) of the adjective callipygous. Had I been pressed to pronounce this word when I first came across this item hitherto unknown to me, I would have said: /kæˈlɪpɪgəs/. But most of the dictionaries place the main stress not on the antepenultimate but on the penultimate syllable.
Why so? A disclaimer first. "I am neither a Greek nor a Latin scholar. All statements, conjectures and hypotheses as to the stress assignment in Greek and Latin nouns and adjectives are likely to be erroneous and at best provisional."
After this exculpation here's my personal and private explanation:
According to the OED the adjective goes back to Greek καλλίπῡγος. The second constituent has a long < ῡ >. A long vowel means a heavy syllable, and a heavy syllable receives the stress in Latin. The consequence for callipygous is that the penultimate syllable should receive the main stress.This is what usually happened to such Greek polysyllabics that entered the English language via Latin.

On the other hand there's the beautiful writer, the calligrapher. The Greek καλλιγράϕος has a light penultimate syllable (no long vowel, no syllable-final consonant cluster), so the main stress falls on the penultimate in the Latin equivalent, which results in the English pronunciation /kəˈlɪɡrəfə/.
... I humbly await the wrath of the expert on Greek/Latin ...

My thanks go to J Windsor Lewis for drawing my attention to the word callithumpian, which according to the OED is a US colloquial term (adjective or noun) referring to a band of discordant instruments or to one of its band members. The stressing of the latter formation should be much less doubtful.

J Windsor Lewis mentions platypygous (with two y's in the OED) and steatopygous and adds the comment:


"We sadly seem t've [sic] allowed the attractive word platypigous for 'broad-bottomed' to lapse into obsoletion."

True as this is in regard to the word as such, the concept, however, has definitely not fallen into oblivion - at least not for me.

Finally, I should like to make mention of Thomas Brown's Pseudodaxia Epidemica of 1646 (I checked the 4th ed. of 1658). Here we find this quotation:

"If so, then men with great bellies will float downward, and onely Callipygæ, and women largely composed behind, upward." (p. 247)

I'm not going to dwell upon the yucky details of this chapter.


Hotel Babylon is a TV drama commissioned by BBC One. In series 4 episode 6 the actress Alexandra Moen impersonating the PR manager of the hotel has to pretend to be a princess from the principality of Liechtenstein. She is required to say a few sentences/phrases in German as well as in English with a German accent.

Her first sentence is:
"I am  Princess Mariana of Liechtenstein and back home I have five pet pigs who share my bed ... [and after having been corrected by a bystander] ... pugs ...".

It's a pleasure for me to announce that John Maidment's Speech Internet Dictionary (= SID) has been rejuvenated, redecorated and refurbished. Please take a look!
Here's the link:

a word new to me


One does not fall very desperately in love with a loud speaker, however pretty, however firmly plump [...], however attractively callipygous.

Callipygous (pronounced  /ˌkælɪˈpaɪɡəs/  (OED also offers /kælɪˈpɪdʒəs/)) means 'having well-shaped buttocks'. I wonder how often I shall be able to use this word in the future.

Update:There's a more extensive discussion of the topic by JWL in his PhonetiBlog No. 408.
posted by Kraut at 02:00 5 comments:

The 2nd edition of Philip Carr's English Phonetics and Phonology is due out in September 2012. The 1st edition dates back to 1999. Philip Carr is Professor of Linguistics at the Université Paul Valéry Montpellier 3.