I wish you all a lot of health and phonetic inspiration!

This a continuation of an earlier blog posting on the description of glottal stop usages.

Eugene Howard Babbitt in his 1896 publication on The English pronunciation of the lower classes in New York and vicinity mentions the usage of the glottal stop in the New York accent on p. 8:

Joseph Wright in his 1905 English Dialect Grammar briefly mentions the fact that in some Scottish dialect areas intervocalic /t/ is replaced by the glottal catch: 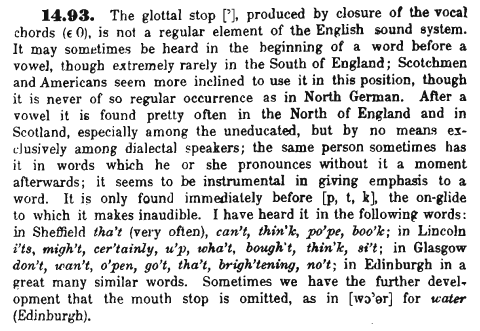 Jespersen distinguishes between glottal reinforcement and glottal replacement. Besides /t/, the two other voiceless stops are mentioned as well.

In 1913 William Grant publishes his Pronunciation of English in Scotland. On p. 30 we find this observation: 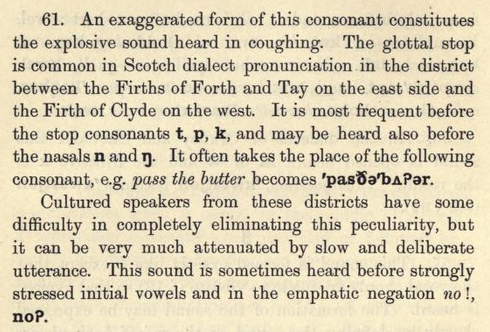 Not only are glottal reinforcement and replacement to be heard in connection with /p, t, k/ but also with /n, ŋ/.

I wonder if Dobson has anything to say on this topic in his monumental English pronunciation.
posted by Kraut at 16:51 7 comments:

Consider /ˈtɔːment/ (= severe suffering) and /tɔːˈment/ (= to make someone suffer severely): They share the same number and types of phonemes and they are semantically closely related.

/ˈɪnsaɪt/ (= clear understanding) and /ɪnˈsaɪt/ (= encourage someone to do something) also share the same number and types of phonemes, but they are semantically unrelated (well, sort of). It this latter group I'm looking for. Here's a first list (some of the items may have identical stress):


Any further examples are greatly /əˈpriːsieɪtəd/!
posted by Kraut at 13:05 3 comments:

The symbol he uses looks like the Greek letter χ or two round brackets (see comments below). In his list of consonant symbols on p. 93 we find a sample word written <buʼer>:

Here Bell indicates the glottal plosive by an apostrophe.

A. J. Ellis in the 4th volume of his Early English pronunciation of 1875 quotes Bell's example on p. 1344, but he uses the semicolon [;] for the glottal stop:

Bell is once again mentioned in Sweet's Handbook of phonetics of 1877 on p. xvi and p. 7. He calls the sound "glottal catch" and uses the symbol [x] for it:

In the 5th edition of his Grundzüge der Phonetik of 1901 Eduard Sievers states on p. 278 that the glottal stop ("Kehlkopfverschluss", which Sievers also calls "Stosston"), for which he uses the symbol [ʾ], replaces an oral closure in some English accents:

Henry Sweet in his Sounds of English of 1908 uses the symbol [!] to indicate a glottal stop:

Daniel Jones in The Pronunciation of English (I have access to the 2nd ed. of 1914) uses the familiar glottal stop symbol (see p. xvi):

I wish you all a Merry Christmas! 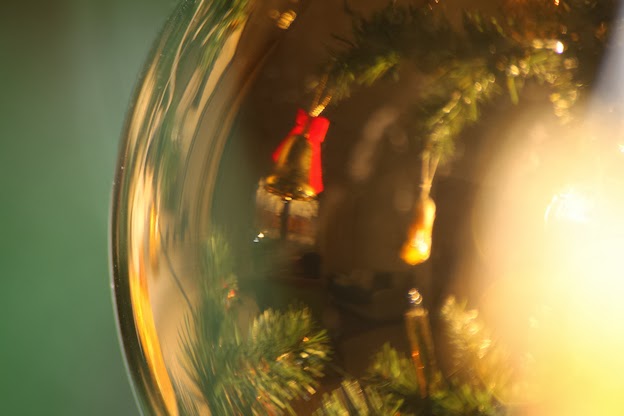 
If you happen to be in London and you're into German worst - sorry: wurst - then you've got to pop into "Herman ze German". The menu can be found here.
They have two shops:


BTW: I don't get any royalty payments for this blog post
posted by Kraut at 18:08 6 comments:

The new eighth edition is due to come out in February of 2014. The accent described will no longer be RP, but General British (= GB). I'm looking forward to the justification for the change from RP to GB.
Here's the table of contents:
PART I: Speech and language
1. Communication
2. The production of speech
3. The sounds of speech
4. The description and classification of speech sounds
5. Sounds in language
PART II: The sounds of English
6. The historical background
7. Standard and regional accents
8. The English vowels
9. The English consonants
PART III: Words and connected speech
10. Words
11. Connected speech
12. Words in connected speech
13. Teaching the pronunciation of English