an English drawbridge over the moat

Writing about Oxford Street and Oxford Road instigated my brain to think about the ever so many names the English language provides for road names. Let's see how many I can dig up within 5 minutes time:

As said - there must be a lot more.

Next question: Why do the English need so many of them?
George Mikes (Hungarian-born, pronounced /ˈmɪkeʃ/) wrote in How to be an Alien: "You must understand that an English town is a vast conspiracy to mislead foreigners". It could well have been a Tschörman writing this because the latter likes and values 'order'. Tschörman houses hef house numbers, and neither ze street names nor ze house numbers are camouflaged as they are in England. A camouflage par excellence consists in giving a house an individual name such as Park Cottage, Midford Castle, Meadow View, Squirrels Leap, Cricket House, Evesham Manor,South Pavilion, Old Friars, Moushill Manor, etc. - but don't forget to check with the local authorities and the Royal Mail Address Maintenance Unit if you plan to individualise your house.

Giving streets and houses fancy names and concealing house numbers is the modern substitute for moats and drawbridges, isn't it?
posted by Kraut at 17:24 3 comments:

homing in on slashes

In a reply to my blog entry of the 19th of January Jack Windsor Lewis points to Bloch & Trager's Outline of Linguistic Analysis of 1942, where on page 47 they mention the term 'diagonals' (i.e. forward slashes), which they use to enclose phonemes. ɥere is the oriɡinal quotation from their book:

One year earlier, in 1941, Trager & Bloch published an article in Language (vol. 17, p. 229) with the title "The syllabic phonemes of English". Here's the screenshot of the footnote in which they use the term 'diagonals' 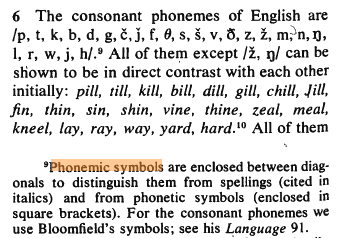 Can anyone come up with an antedating?
posted by Kraut at 17:38 No comments:

a lunch box on Times Square

A writer of pronunciation textbooks recently asked for help with a "simple rule" that explains the different stress patterns in Times 'Square or New 'York and 'lunch box or 'drugstore.


Have I whetted your appetite?
More to come in a future blog entry. Bon appétit!