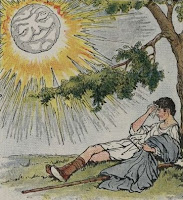 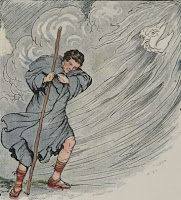 
This text, translated into English and many other languages, has been used for the description of phonetic features of languages for quite some time. The English version is as follows:

The text serves its purpose fairly well if it it used for characterising the phoneme inventory of English, although according to Deterding (2006) some phonemes are missing, namely the consonant /ʒ/, the diphthongs /ɔɪ/, /ʊə/ and /eə/, and there are no triphthongs. Limitations also exist in regard to positional variants, e.g. word-initial and word-medial /z/ is missing. For additional deficiencies of the text see Deterding (2006).

As a consequence Deterding favours an adaptation of another Aesopian fable, entitled 'The Boy who Cried Wolf'. 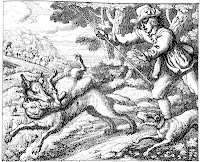 There was once a poor shepherd boy who used to watch his flocks in the fields next to a dark forest near the foot of a mountain. One hot afternoon, he thought up a good plan to get some company for himself and also have a little fun. Raising his fist in the air, he ran down to the village shouting "Wolf, Wolf." As soon as they heard him, the villagers all rushed from their homes, full of concern for his safety, and two of his cousins even stayed with him for a short while. This gave the boy so much pleasure that a few days later he tried exactly the same trick again, and once more he was successful. However, not long after, a wolf that had just escaped from the zoo was looking for a change from its usual diet of chicken and duck. So, overcoming its fear of being shot, it actually did come out from the forest and began to threaten the sheep. Racing down to the village, the boy of course cried out even louder than before. Unfortunately, as all the villagers were convinced that he was trying to fool them a third time, they told him, "Go away and don’t bother us again." And so the wolf had a feast.

and its transcription should also indicate intonation marks.

BTW: There are other texts used for similar purposes, e.g. Arthur the Rat, Comma Gets a Cure or The Rainbow Passage.
posted by Kraut at 12:49 6 comments: