approximant, sonorant, resonant or what?

In my blog entry on open approximation - see here - I wrote that academics call sounds which are produced with open stricture either approximants, sonorants, resonants, glides, semi-vowels or even frictionless continuants.

A helluva lot of terms for this sound group, innit? Which one should be preferred?
Here's a brief random survey first.

Ashby, P. (2011), Understanding phonetics
Sounds which are produced with wide approximation are called approximants by the author. She points to the fact that phonologists distinguish sonorants (= vowels, approximants, nasals) from obstruents (= plosives, fricatives, affricates. The English sounds belonging to the group of approximants are [ɹ, w, j, l].

Ashby, M., Maidment, J. (2005), Introducing phonetic science
In their glossary of the book an approximant is described as a "consonant sound made with a constriction between two articulators which is not narrow enough to cause air turbulence" (190). On p. 57 approximants are equated with sonorants - "[...] approximants are sonorants [...]" - meaning that approximants are a subgroup of sonorants. Reference is made to "older terms" (59) for approximants: glides or frictionless continuants. English approximants are [ɹ, w, j, l].

Collins, B., Mees, I. (2013), Practical phonetics and phonology
The authors present a clear-cut, unambiguous division of the English consonant system on p. 52:


Cruttenden, A. (2008), Gimson's pronunciation of English
Cruttenden's classification of sounds according to their noise component due to the degree of constriction in the vocal tract leads to two classes of sound - obstruents (comprising plosives, fricatives and affricates) and sonorants (nasals, approximants and vowels).

Knight, R.-A. (2012), Phonetics - a coursebook
When the articulators are positioned in wide approximation we produce the English approximants /w, j, l, r/. Approximants together with nasals and vowels belong to the larger class of sonorants. Plosives, fricatives and affricates are subsumed under the category of obstruents.

Laver, J. (1994), Principles of phonetics
Sounds produced with open approximation during their medial phase are called resonants by Laver. They are divided into central resonants - comprising the approximants /j, w, r/ and the vowels (which Laver calls vocoids) - and the lateral resonant /l/.

Lodge, K. (2009), A critical introduction to phonetics
Sounds produced with the articulators too far apart for friction to occur are called approximants (Lodge also makes mention of the equivalent terms frictionless continuants and semi-vowels). This class of sounds encompasses [ɹ, w, j, l].

Windsor Lewis, J. (1969), A guide to English pronunciation
Here is Windsor Lewis's classification in diagrammatic form based on paragraph I, section 8 of the book: 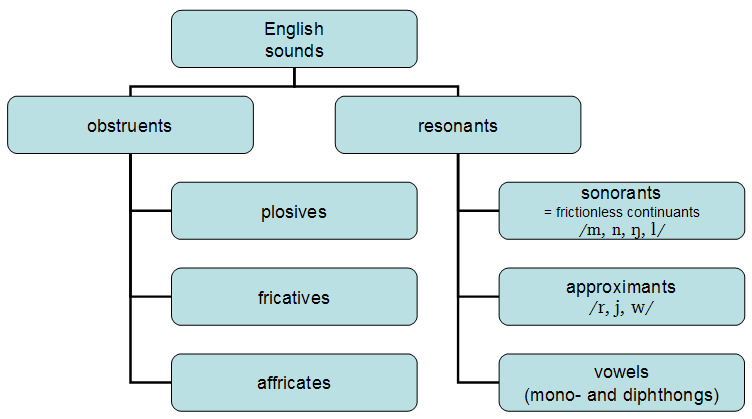 What are we to make of all this?
The majority of phoneticians mentioned above prefer to use the term approximant for sounds produced with wide/open approximation. So I'm going to call [ɹ, w, j, l] approximants. (Kraut locutus, causa finita)