Compression as a phonetic term

The term compression in its phonetic sense denotes the reduction of articulatory movements leading to
When was the term first used? The OED remains silent. It was by mere chance that I found a fairly early mention of the term in Notes on Spelling Reform of 1881 by W. R. Evans. On p.11 we read this:


During all the time occupied by these changes - the shifting of vowel-sounds step by step along the scale, the expansion of simple vowels into diphthongs, and the compression of diphthongs into simple vowel-sounds - the written form of the language remained nearly stereotyped as regards any indication of such changes, [...] 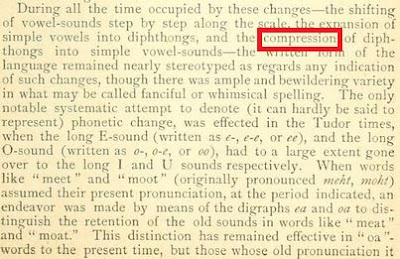 For earlier uses of the term it may be worthwhile to check "The Phonetic Journal", which was published from 1873 to 1905. It's a pity I don't have access to this journal.

BTW: I couldn't find anything on this W. R. Evans. The ODNB has but an entry on a clergyman by the same name. If any of my followers can enlighten me, I'd be most grateful.
posted by Kraut at 20:33