"Seven Sisters Station" is an underground and overground station in an area of North London called  "Seven Sisters". This strange name seems to go back to seven elm trees that had been planted there in the 17th c., 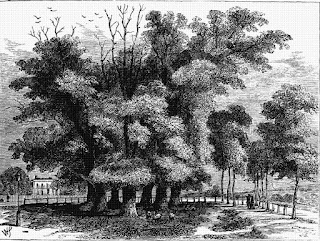 before they were finally replaced by a ring of hornbeam trees at the end of the 20th c., though not exactly at the same place.
The Independent published this photo of seven nuns making for an amusing appearance while they were waiting at Seven Sisters station.


PS: Should you be a lady heading for Cockfosters, a London suburb, and are unsure whether you are on the correct line, never ask the gentleman next to you: "Is this Cockfosters?" You might get an unexpected answer.
PPS: Others spring to mind: Bakerloo, Barking, Elephant and Castle, ...