The sketch I'm writing about was first aired by the BBC on the 4th of September 1976. There are two versions actually - an earlier one played and recorded in front of a very quiet live audience and a later one, which had been re-written, and acted in front of a much noisier audience. The sketch was handwritten by the late Ronald ("Ronnie") William George Barker (1929-2005) under his alias George Wiley. The original title was "Annie Finkhouse". The script begins like this: "An old ironmonger’s shop. A shop that sells everything — garden equipment, ladies’ tights, builders’ supplies, mousetraps, everything. A long counter up and downstage. A door to the back of the shop up left. The back wall also has a counter. Lots of deep drawers and cupboards up high, so that R. C. [Ronnie Corbett] has to get a ladder to get some of the goods that R.B. [Ronnie Barker] orders. (Please discuss)  [sic]
(R.C. is serving a woman with a toilet roll. He is not too bright.)" 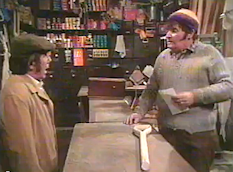 The two main actors are Ronald ("Ronnie") Balfour Corbett, who is one of the finest British sketch comedians, and Ronnie Barker. Corbett plays the shopkeeper and Barker is the customer. The acquired title of the sketch is "Fork Handles" or "Four Candles". It's under this title that you can find the video clip in the Internet. (My thanks to John Maidment for drawing my attention to it).

The sketch is phonetically interesting, and I should like to make some comments on the sketch in future blog entries.
posted by Kraut at 12:24