1,000.00 metres/meters = 1 kilometre/kilometer; so far [sic], so good.
But how does one pronounce 'kilometer'? Either /kɪˈlɒmɪtə/ or /ˈkɪləˌmiːtə/ (ignoring variants thereof), if it's General British.
A friend of mine once argued for stress on the first syllable drawing on semantics and analogy:
1. meaning - because 'kilo' means 'one thousand' and
2. analogy - because kilogram, kilohertz, kilobyte, millimeter etc. are stressed on the first syllable. (He did say ther'mometer though.)

I must admit that some of these are totally alien to me, so I had to scurry to my dictionaries. As you can see, these formations consist of two or three constituents the second of which is {-meter}. The first constituent is either
Stress assignment is also variegated.

Let's home in on kilometer. Etymologically speaking the initial part {kilo} according to the OED is an arbitrary derivative of Greek χίλιοι (= thousand). The term kilomètre seems to have been introduced first into French in 1795 by an institution which is nowadays called Bureau international des poids et mesures (= BIPM), which is situated in Sèvres, France.
The term seems to have entered the English language in a letter to the editor of the periodical Naval Chronicle of 1810 written by a correspondent with the nom de plume PHILOTECHNES. On page 301 of said periodical the correspondent lists various terms for long measures (I've highlighted the term under scrutiny; why it is spelled with double <l> I don't know):

1810 is the date of the first written English record in the OED; I know of no antedating. The OED also points to the 1828 edition of Webster's dictionary. Here is a snippet of the entry (I've highlighted in red the accent indicating the stressed second syllable because the copy is of mediocre quality):

This is what the 1914 edition offers:

As you can see the stress is now on the 1st syllable. The present-day online version of Merriam-Webster has this:

I'm afraid I don't have access to the 1847 and later editions to verify this. All I can see is that the 1914 edition indicates stress on the first syllable and that there are no stress variants.

There is a Universal and Critical Dictionary of the English Language (Boston) by J. E. Worcester published in 1849, which records kilometre [sic] with initial stress:

Hunter & Morris in their Universal Dictionary of the English Language (New York) of 1898 indicate antepenultimate stress however:

And finally, in Webster & Morris's The Universal Self-Pronouncing Dictionary of the English Language published in Philadelphia etc. in 1908 the main stress is now on the penultimate syllable:

It seems that in American English the word enjoyed both stress patterns almost since it entered the English language. Let's look at the cis-atlantic situation now.

The first edition of the OED also indicates main stress on the first syllable:

One of the followers of this blog tried to find out "when Brits would want to talk about kilometres", but it seems to be fairly difficult. The OED mentions inter alia an 1881 book entitled An Elementary Treatise on Mensuration by George Bruce Halsted, Professor of Pure and Applied Mathematics at the University of Texas, who advocates the metric system:

The term seems to have entered fictional literature by 1888 when it appeared in the novel Our Sentimental Journey through France and Italy published in London and written by Joseph Pennell and Elizabeth Robins Pennell. The word appears several times in the book. Here's one of the pages of the book: 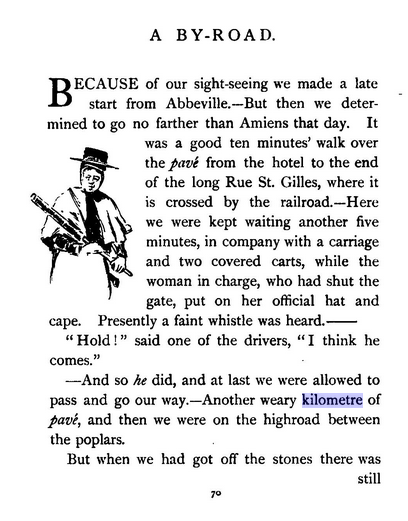 What about the stress pattern(s)?

The Phonetic Dictionary of the English Language of 1913 by H. Michaelis and D. Jones only offers initially-stressed kilometre:

Daniel Jones in his 1919 edition of An English Pronouncing Dictionary (= EPD) indicates main stress on the initial syllable but no variant:

The fourth edition of the EPD of 1937 is the first one1 which offers a second "less frequent form" (I quote the 9th edition, p. xiii) with stress on the antepenult. This situation remains unchanged up to the 15th edition, rewritten by Roach, Hartman and Setter, which came out in 1997:

When you consult the entry kilo- , you find this somewhat conflicting note:

It is not until the 18th ed. of 2011 that the inconsistency is cleared by replacing kilometre with kilogram. Moreover, the reader is provided with a note added to the dictionary entry for kilometre: 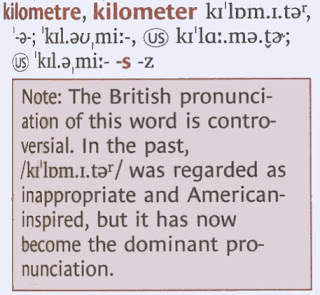 The preference poll carried out by John C. Wells for his Longman Pronunciation Dictionary (= LPD) reveals this (it's taken from the 3rd edition of 2008): 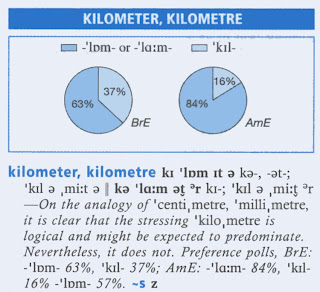 Around two thirds of the British respondents voted for antepenultimate stress.

Much sparser information is to be found in the Oxford Dictionary of Pronunciation (= ODP):

Is the order of variants of any importance? "The ordering of variant pronunciations does not imply that one form is more desirable or 'correct' than another." (x) Well, if that is so, why did Clive Upton change the order from first and then second syllable for the British accent to second and then first for the American model?

On balance I would say that American English favours antepenultimate stress and British English seems to follow suit.
----------
1My thanks go to Jack Windsor Lewis for checking various editions of the EPD
posted by Kraut at 12:41