Stibium /'stɪbiəm/ is the Latin name for the chemical element antimony. Don't worry, this is not a blog post on chemistry, but rather one about the stress patterns of this word.


The antimony sulphite has been known for a very long time. In the 17th c. the Benedictine monk Basil Valentine published a monograph on the chemistry of the metal (see here for a much more detailed description of the etymology and history of antimony).

But I'm interested in the stress pattern of antimony.
Samuel Johnson in his Dictionary of the English Language (5th ed. 1785) assigns initial stress to the word: 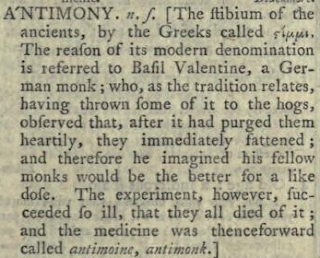 In John Walker's Critical Pronouncing Dictionary ... of 1824 the word is also marked as initially stressed:

Addendum:  The first edition of the OED records the initial stress pattern of antimony only:

In their Phonetic Dictionary of the English Language of 1913 H. Michaelis and D. Jones indicate the pronunciation of antimony as /ˈæntiməni/ - no change of the stress pattern:
I then checked the 1st ed. of 1919, the 9th of 1958 and the 11th of 1964 (the latter is a reprint of the same edition of 1963 "with corrections and minor revisions by A. C. Gimson" (p. vi)) of the English Pronouncing Dictionary. In all three editions the word has initial stress. I don't have the 13th edition at hand for which Gimson took over the editorial baton; but a friend of mine told me the entry looks exactly like that of the 12th edition. Even the 14th ed. of 1977 (with Gimson still being the editor) leaves the stress pattern unaltered.

From the 15th edition onwards it's Peter Roach, James Hartman and Jane Setter who've taken responsibility for the (C)EPD. And it is from this edition onward that we are offered an additional, second pronunciation variant - the one with antepenultimate stress:

Is there any meaning behind this particular sequence of pronunciations? Here is what the editors write:


Where more than one stress pattern is possible, the preferred pronunciation is given first and then alternatives are listed. (xv)

As an addition to the prefix anti- we find the following note in CEPD18 (p. 23):


Note: Prefix. Numerous compounds may be formed by prefixing anti- to other words. Most often, these compounds carry primary or secondary stress on the first syllable, e.g. antihero /ˈæn.tiˌhɪə.rəʊ/ /-t̬iˌhɪr.oʊ/, anti-icer /ˌæn.tiˈaɪ.sər/ /-t̬iˈaɪ.sɚ/, but there are also cases in which the second syllable takes the primary stress, e.g. antinomy /ænˈtɪn.ə.mi/.

This description causes me tummy ache for two reasons:
1. How does the dictionary user know if a formation containing the constituent is a compound or not?
2. Prefixes are bound morphemes and compounds are combinations of at least two free morphemes. I would never ever classify antinomy as a compound. Antihero and anti-icer are neo-classical compounds with anti being a combining form.

LPD in all its three editions has initial-stressed antimony only.