This is how my last blog entry ended:
"Murray must have come to the conviction that the basis of phonetics of that time was solid enough to embark on the undertaking of marking the pronunciation of each headword. Of course, there had to be provided a key to the symbols."
And:
"The problem still to be solved and the question to be answered was which accent of English to represent."
Murray's decision to include phonetic notations seems to have been reinforced by a paper with the title "Sound notation" by Henry Sweet presented to the Philological Society in 1880.
As far as the key to the symbol is concerned Murray provided a list of such symbols on page xxv of volume 1. 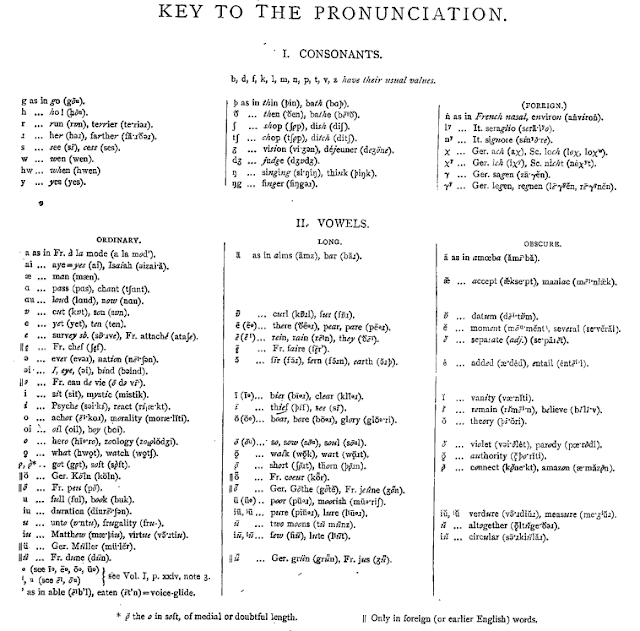 As far as the question is concerned which accent of English to represent MacMahon writes: "There can be no doubt [...] that he [= Murray] never considered indicating anything other than educated pronunciations of English." (77) MacMahon rightly believes that this had to do with the social class structure of Victorian England and with the scholarly nature and claim of the dictionary.
But it remains vague which accents were represented by the transcriptions. In a letter of 1882 to Thomas Hallam Murray states that the transcriptions represented "the general outline of recognised pronunciation", a statement which MacMahon qualifies as being ambiguous:
- is 'recognised' a slip for 'received' (in an Ellisonian sense?) or
- does the statement refer to all educated accents of English?
It seems that - on the one hand - Murray "was unwilling to set up any one idiolect or accent of educated English as his model" (80). On the other hand - what should Murray do to indicate and categorise the wide range of phonetic variation? How could he escape this trap? Murray experienced grave difficulties when it came to notating unaccented vowels. One of the words listed by MacMahon is propose where Murray noted seven different pronunciations of the initial unstressed syllable. Murray seems to have relied heavily on the views of Thomas Herbert Warren, then President of Magdalen College, and on Sweet and Hallam.


Here are the bibliographical details of this - for me fascinating - article:
MacMahon, M. K. C. (1985): "James Murray and the phonetic notation in the New English Dictionary", Transactions of the Philological Society 83: 72-112.
If you're interested in the dawn of modern phonetics and (meta-)lexicography you're invited to read this article.
posted by Kraut at 18:43