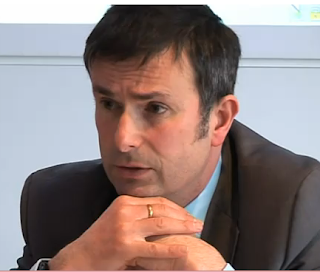 Members of a specialist group recently discussed the question of what to call the lengthening of words in order to gain planning time. There are, as we all know from personal experience and/or habit, various techniques to avoid silence when we are both speaking and in the planning stages of an utterance. This planning may take longer than expected. Robert Peston has been mentioned in this connection.
Robert Peston is a British journalist who has been Business Editor for BBC News since 2006. One member of the group wrote that RP's way of speaking is "[...] an interesting phenomenon which makes quite heavy demands upon the radio or TV listener and makes P's utterances markedly more difficult to process. It's a good illustration, if we needed one, of the contribution that weak quality / weak stress makes to skilled listening in English: downgrading the meaning-bearing value of a syllable and/or signalling a possible function word."
YouTube supplies plenty of sound files illustrating his speech style.
Let's listen to how RP handles the problem of gaining time:

What he says is "I mean the way I tend to see things is erm that on the one hand plainly conditions er economically, financially are a bit better than they were". The sentence lasts for about 11s.

The phrase "I mean the way I tend to see things" contains 9 words and lasts about 1.78s (allow for rounding errors). The final phrase "economically, financially are a bit better than they were" also contains 9 words and lasts for 2.2s. It's not what I would call lento speech. On the other hand the words "is", "plainly" and "conditions" are comparatively long as are the pauses in the sentence. And we have two 'erms" in it.
Here's the link to the video clip.
BTW: I do not intend to indicate that this one sentence is representative of RP's speech style in general. More to come in a future blog entry.
posted by Kraut at 21:39