I'd like to come back to the interview recently given by Professor Peter French on forensic acoustics. His speech style displays some features typical of colloquial English which, at times, make it difficult for EFL speakers to understand such an enunciation. I'm not saying, however, that Peter French's talk was difficult to understand; quite the contrary!
Fairly at the beginning of the interview - at about 1:13 minutes - he says: "[...] thirteen murders, which were carried out principally in West Yorkshire [...]." Listen to this part and concentrate on the words "which were":

Now look at the time-amplitude wave of these two words (it's a stereo recording): 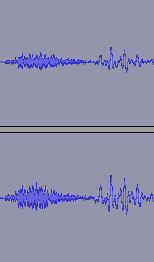 The "which" [ʍʧ] is approx. 63ms long (it's the aperiodic part of the waveform), and the "were" [wə] lasts about 52 ms. Listen to them (the segments were amplified by me). You hear the two words together three times, then separately: