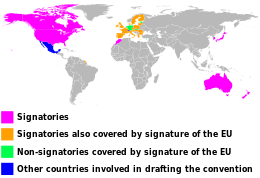 You will have heard or read about ACTA, the agreement to be brought about between several countries. Some nations have signed it, others have not yet ratified it. Some institutions cast doubt on this agreement because they fear that ACTA may infringe on people's rights to free speech.
It seems that only few people know what's behind this acronym: Anti-Counterfeiting Trade Agreement.
It also appears that a few news presenters do not check the pronunciation of counterfeiting with their pronunciation unit or dictionary. Here's an example of a section taken from yesterday's evening news of the Second German Television (= ZDF):

The word counterfeit (n., vb.) comes from Old French contrefaire with the past participle forms contrefet or contrefait. According to OED the word entered the English language in Middle English times. Thus, it has nothing to do with the English verb/noun fight, however attractive the thought may be as regards ACTA.
posted by Kraut at 17:54