No, AEP does not stand for Auditory Evoked Potential, at least not in this context, but for
Accepted English Pronunciation. It's the title of a book of 123 pages written by Beverley Collins, S. P. den Hollander and Jill Rodd in 1973. What I acquired is the "zevende druk" of 1987. (The eighth impression bears the title Sounding Better with Inger M. Mees as an additional co-author; a CD now comes with the book.) I bought it second-hand (alas, without the cassette, which was not available) because book and cassette are out of print. 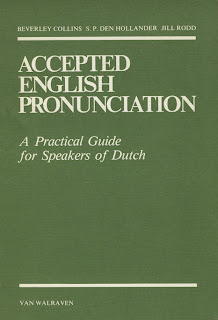 The subtitle reveals that the book is directed at NSs of Dutch. It's designed for intermediate and advanced learners of English.

Interestingly, the title contains the adjective 'accepted'. When you replace it by the fairly outdated quasi-synonym 'received', you get Received English Pronunciation. And it was particularly the section on the model of pronunciation this book is based on which I was interested in and which made me buy it.

Paragraph 3 on p. 10 is entitled 'Models for pronunciation'. The accent of English for learners to imitate is called Received Pronunciation and abbreviated to RP. This accent is described as the "speech of the average modern RP speaker" (10) and as "modern English Pronunciation" (7).

More on the contents of this booklet in a future blog entry. There is, by the way, a parallel publication entitled Accepted American Pronunciation by Collins and Mees.