weakform words and A. J. Ellis 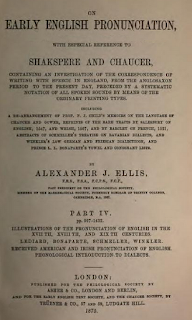 I'm skimming Alexander J. Ellis's On Early English Pronunciation, part IV, for what the author calls clear and obscure forms of words (what we would nowadays term strongforms and weakforms and of which Ellis lists 46).

He discusses the phenomenon in a section entitled "Unemphatic Words" (p. 1166). Emphasis is described as "a prominence given to one or more words in a clause, varying with the mood and intention of the speaker [...] emphasis is "free"" (p. 1158). The choice of either the clear or the obscure form is "assumed pretty much at the pleasure of the speaker" (p. 1166).

I found a nice sentence by which Ellis tries to demonstrate the differences between the strong- and weakform usages of to, two, and too:

I gave two things to two men, and he gave two, too, to two, too.

An Englishman wants to buy a train ticket at a German railway station. So he goes to the ticket counter and says: "Two to Toulouse!" To which the German railway official replies: "Täterätä!" 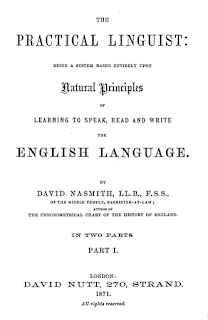 The words are presented in the order of frequency of occurrence as determined by David Nasmith in his book The Practical Linguist [...] Learning to Speak, Read and Write the English Language, (Oxford 1871).

Linking up with Jack Windsor Lewis's blog no. 403 and the comments therein on the weakform variants of and, it might be of interest that Ellis also mentions the preferred use of /ən/ before consonants: