The day before yesterday I received a copy of the Festschrift Commemorating the Retirement and the 70th Birthday of Professor John C. Wells, published by The English Phonetic Society of Japan (= EPSJ) in 2011. 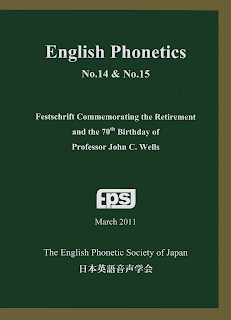 Allow me to start with a rant - not about the book - but about the appalling bank charges. The price of the book is ¥4500 (postage is free). You have to transfer the money to a Japanese bank - in my case from Europe. You normally do this by a system abbreviated SWIFT, which is short for Society for Worldwide Interbank Financial Telecommunication. You have to fill in a special form, which I did. My bank charged me €15 in addition to the cost of the book. But that was not all. The bank in Japan charged the EPSJ roughly the same amount. Aaarrrgh! I've said it several times on various occasions: "In my next life I shall become a bank!" End of rant.

The book has about 230 pages comprising a "Forward" [it's actually a Foreword], a two-page article "About me" written by the dedicatee, John C Wells, [I don't know of any other Festschrift in which the dedicatee gives an account of his (academic) life] and a few "Congratulatory Messages" by Masaki Tsudzuki, Jack Windsor Lewis, Hyun Bok Lee, Kazuhiko Matsuno, Masanori Toyota and Tadao Murata. What follows is a series of 21 articles on various phonetic - often asiocentric -  aspects. There is no tabula gratulatoria. The book was originally intended to mark the retirement of John Wells in 2006. What a long gestation period!

With many articles the focus is on English and one of the non-IE languages (e.g. Japanese, Finnish, Korean). A few articles deal with English exclusively. I'm looking forward to giving them a close reading.

A critical evaluation of some articles can be found here.
posted by Kraut at 08:08