I apologise for two reasons:
(1) for going off-topic and
(2) for writing about history without being a trained historian. 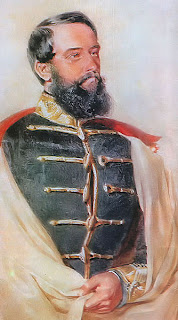 Here are a few lines about György Klapka, whose name I mentioned in a blog when talking about Jerome K Jerome's middle name Klapka. It seems that JKJ's parents had a lodger by the name of György Klapka, a Hungarian general and expatriate. When I first mentioned this I was wondering how on earth a Hungarian general came to live in England. So, here is what I found out:
Georg Klapka was a Banat Swabian born in Temesvár in 1820, who first served in the Austrian army and finished his military training in Vienna. During the insurrection of the Hungarians of 1848 - 1849 against the House of Habsburg Klapka fought against Austria. He became a general and conducted a series of fights but had to surrender on honourable terms in the end. Klapka had to accept a passport valid for England and America and immediately went to England, where he lived for many years and wrote his Memoiren (Leipzig 1850). This sketchy description makes the connection between Jerome Klapka Jerome and Georg/George/György Klapka a little bit more plausible.
posted by Kraut at 07:35