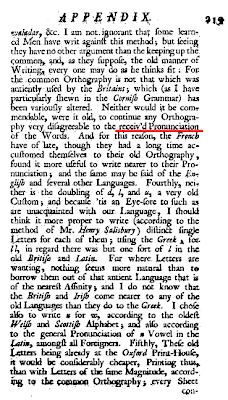 In a draft revision of March 2010 OED online lists Edward Lluyd as the first coiner of the term 'received pronunciation'. Lluyd (or Lhuyd, Llwyd, Lloyd) used the expression on page 4 of the preface to his first volume (titled Glossography) of the Archeologica Britannica. The Glossography was completed in 1707. The book was intended as a history of Wales and that of the first settlers in Cornwall, Wales, Brittany, Scotland and Ireland. Lluyd died before he could write a second volume.

In his preface there is a section in which he addresses Welsh readers: "AT Y KYMRY". It was translated into English by William Nic(h)olson, Bishop of Derry, and published as an appendix (pp. 216ff.) to his book The Irish Historical Library in 1724. On page 219, which you can see here, one finds the term "receiv'd Pronunciation".

Where is the avid reader to find a yet earlier record of the noun phrase?
posted by Kraut at 07:35