Pierre-Étienne Du Ponceau (1760-1844), born at St-Martin-de-Ré, France, emigrated to the US at the age of 17 as secretary and an aide-de-camp to Baron Friedrich Wilhelm von Steuben. Duponceau translated his forenames into English and called himself Peter Stephen DuPonceau (or Du Ponceau or Duponceau). 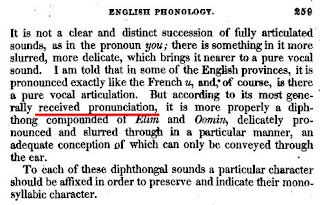 He was interested in linguistics, philosophy and jurisprudence, joined the American Philosophical Society and was President of it until his death in 1844. He doggedly collected data on Amerindian languages. This led to the publication of Languages of the Indian Nations of North America in 1838. He also wrote "English Phonology; or, an Essay towards an Analysis and Description of the component sounds of the English Language", which was published in the Transactions of the American Philosophical Society, New Series 1 (1818): 228-264.

He invented a lexical set of words to refer to the sounds he wanted to describe. Unlike John Wells's sets, which the latter 'dreamt up' in preparing his seminal three volumes of Accents of English, Duponceau's set consists of arbitrary names: for example, the vowel sound in people, key or scene is called "Elim" (254).The sound /r/ is given the name "RO" (262), by the way, perhaps paving the way for the epithet 'rhotic'.

Describing the diphthong in pure or endure Duponceau uses the expression "received pronunciation" (259; see the above scan). He is not very explicit about which accent he intends to characterise, but as he occasionally refers to Connecticut, the Eastern States or the English provinces, it seems justified to assume that he gives a description of the sounds of American English of his time. So here we are: General American = Received Pronunciation? No - not really! Moreover, Duponceau did not intend to set up an institutionalised definitory label.
posted by Kraut at 07:17