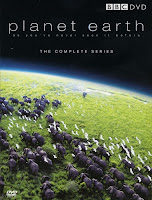 Inspired by the two blogs I mentioned in my blog entry of the 9th of November  I fetched the CDs of David Attenborough's Planet Earth from my cabinet yesterday and continued extracting the sound track and transcribing the text of the first three series for later analysis, something I had started in January this year. Extracting the sound track is a bit time-consuming; one can download the subtitles from the Internet, but the ones I found are not a hundred per cent precise.
I can thoroughly recommend (without getting any royalties from BBC) this set of DVDs to anyone who's interested in nature and in Sir David's voice. The photograph of Sir David was presumably taken in 1969. The DVD box came out in 2006.
posted by Kraut at 08:04