If, as it seems, hearing the difference between /e/ and /æ/ is not a big problem for my German students of English (although they were not brilliant in this task and the words containing these vowels were pronounced by other persons), the problems must lie somewhere else.
Let's look at some of the vowels of the two languages: 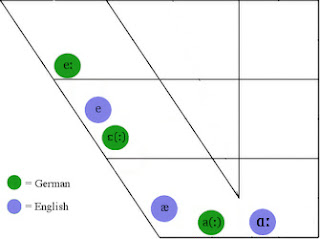 1. English /æ/ does not exist in German; the nearest one is short or long /a:/ as in <Bann> and <Bahn>.
2. German /ε/ lies between English /e/ and /æ/; there's no short /e/ in German, only a long /e:/ as in <Beet> and a long /ɛ:/ as in <Ähre>.
3. German <Welle> and <wähle> are pronounced /ε/ and /ε:/ respectively, so there is no qualitative distinction.
There is a gap in Standard German where General British has the /æ/. Somehow the German brain 'pulls' the English /æ/ towards German /ε/. This tendency is reinforced by English loanwords such as fan, van, band, slapstick, hat trick, laptop, fantasy, manager, match, camping, establishment, action and many others. Germans are used to saying these with an /ε/ instead of an /æ/, which is perfectly all right within the realm of the German language. But when it comes to speaking General British you've got to pronounce them with an /æ/ - no extenuating circumstances are granted.
When I try to talk my German students into using the /æ/ I sometimes can't avoid the impression that some of them have the feeling that they exaggerate the /æ/ - that some other person speaks through them - that I try to make a fool of them. Be it as it may - it's hard work to convince those doubting Thomases. And even when I finally manage to persuade (a few of) them it's still a long and winding and lonesome road till the /æ/ comes naturally out of their mouths.

The quality of these vowels of German and English is a tricky thing. More on it later.
posted by Kraut at 08:50